After a long mourning, actress Shweta Khadka, is making a comeback as an actress and film producer. After the death of her husband of a month, Shree Krishna Shrestha in 2014, Shweta had went in to a long mourning. She was treated for depression and other issues before she started smiling again. It took almost a year for the smile to return in her face. 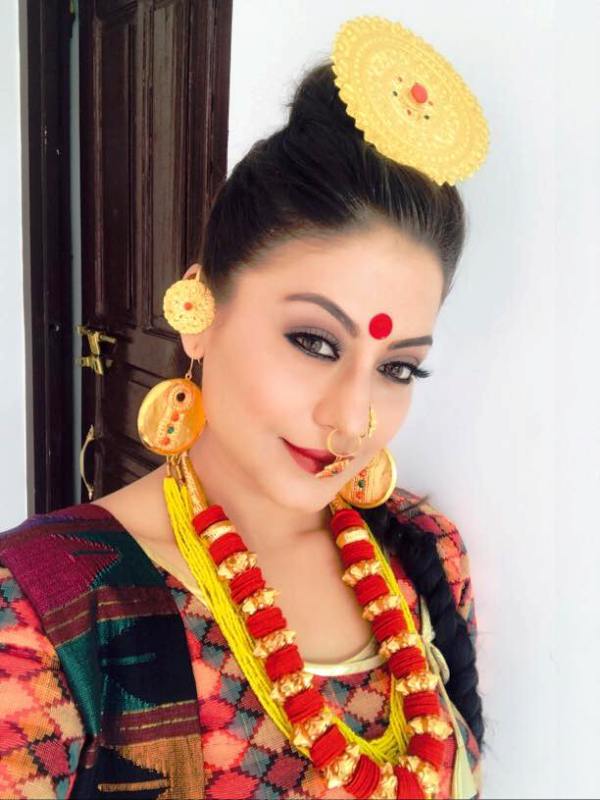 Shweta has over come the sorrow and has gathered the strength to return back to the entertainment industry. But, before she could start the comeback movie, she started a social work – to build a residential area for the earthquake victims Majhi in Sindhupalchowk. The district is the home district of late Shree Krishna Shrestha. After the completion of the social work, Shweta is all set to start the shooting of ‘Kanchhi’, a movie featuring Shweta with Dayahang Rai in leading role.

Before the start of the movie, Shweta has also started modelling. In a photo she shared recently she can be seen in traditional Limbu attire. The photo was taken during the shooting of an advertisement of a remit company. Shweta is wearing shreeful, chepte gold, kantha (typical jewelries), dhaka and sari common among Limbu women. Although not a Limbu, the attire has suited the actress.

What is the comeback movie of Shweta Khadka?

The movie Shweta is preparing to produce is named ‘Kanchhi’. In the movie Shweta will be featured opposite to Dayahang Rai. The movie will be directed by Aakash Adhikari, the director of the last movie of Shree Krishna, ‘Kohinoor’.

The home production movie was scheduled to start a while ago. But, because of Shweta being busy in the construction of Majhi basti, it is delayed by a few weeks.

A video report about the construction of Majhi Basti: