Considered one of the best dancers in the Nepali film industry, Mithila Sharma is also a very talented actress. In her mid-50s, Mithila is still active in dancing and acting and has no plan to retire soon. When asked, she says that she will spend her whole live in the entertainment industry. Her husband Motilal Bohara is also supportive to her decision and he also appreciates Mithila’s popularity and celebrity status. 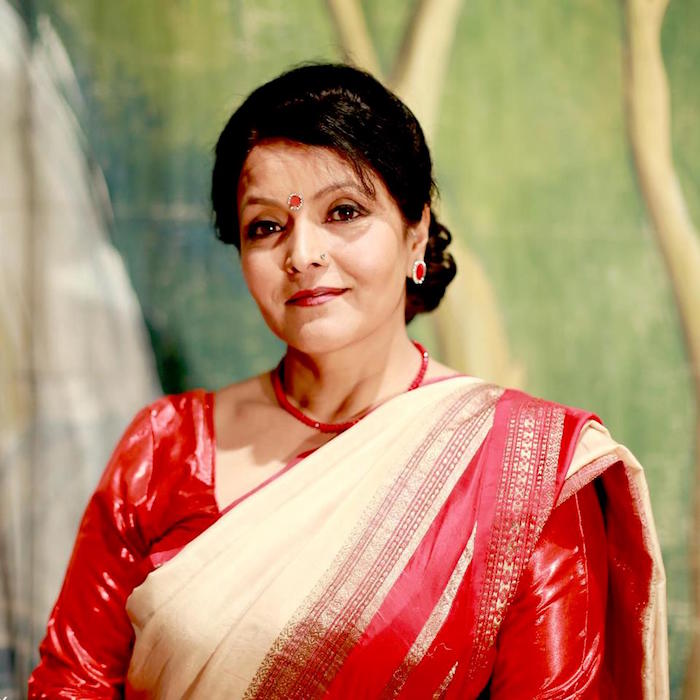 Mithila Sharma started dancing when she was 10 years old. At that time she was one of the five dancers in program held to mark the birthday of late King Birendra. They had danced in a song by Rajpal Hada under the music composition of Gopal Yonjan. As an actress she debuted in ‘Biswas’ a movie directed by Chetan Karki. In the movie, she was featured as a dance teacher. In a latest movie – ‘Mukhundo’ (Mask of Desire) took her to the international arena and her role was highly appreciated. Her noted films include Mukundo, Sukha Dukha, Didi, Muna Madan, Basai and Afno Manchhe. Mithila has mostly given preference to character roles rather than the commercial lead roles in her acting career.

In addition to acting, Mithila has been dance teaching for the last two decades. She has taught dance at various schools like Kanti Ishwori School, St. Mary’s School, and Gems School. While teaching dance at Kanti Ishwori, Mithila was still in school. She used to go to school and teach dance after her school finished. These days (at the time of this writing in 2017) she is affiliated to St. Mary’s School.

Mithila has acted in about 100 movies, more than 25 plays and in more than 200 telefilms. In addition to dancing and acting she has also written and directed 10 musicals. Although she had married numerous times in movies, she remained unmarried until 50. She got married in 2014 with ex-Inspector General of Police Motilal Bohara.

In addition to being a good dancer and actress, she also writes poem and songs. Here is one of the poems of Mithila:

Who is Moti Lal Bohara?

An ex-police chief, Moti Lal Bohara started in police force in Shrawan 32, 2024 BS as a Assistant-Inspector of police. After a year, he became Police Inspector (on Falgun 3, 2025) and became the IGP (police chief) after 24 years, on Falgun 15, 2049. He retired after serving 4 years as IGP.

Bohara had met Mithila Sharma in 2025, when he was the police inspector. At the time of marriage with Mithila he was 74 years old. That was a few years after his first wife died. Shortly after they got married in the court, they had also performed a traditional marriage ceremony at home. The marriage ceremony was a simple one without excessive show-off and jewelleries.

Biography of Mithila and her husband Moti Lal Bohara