An example of good friendship between actor Aryan Sigdel and Namrata Shrestha was witnessed during the press meet organized to unveil the music of upcoming movie ‘November Rain’. During the press meet, Namrata was tiered due to the busy schedule in shooting. Aryan welcomed her by hugging the actress. The actress who wasn’t feeling well had to leave the stage for a while to take medicine. Aryan followed Namrata to the bathroom.

Namrata talking about the movie (video): 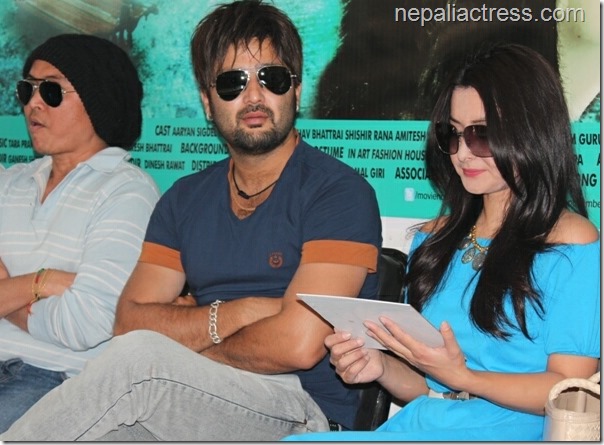 To the questions of the journalists Aryan told, “Let me tell you, Namu isn’t feeling well. I took her to the bathroom so that she can get fresh. She also vomited.” Aryan was taking good care of his sick friend.

The the question of the relationship of Aryan Namrata told, “He is a good friend. I call him Alien with love.” They meet during the shooting of ‘Mero Euta Sathi Chha’. The second film of the two is the upcoming movie. About Aryan’s upcoming marriage, Namrata said, “He was a lonely guy. Now somebody is coming to care him. I am very happy. Our friendship will continue even after the marriage.”

Namrata is planning to groom Aryan and go in the marriage ceremony. Namrata has also promised to help in shopping for the marriage.

The movie directed by Dinesh Raut also features Chhulthim Gurung who wasn’t present in the program.

2 thoughts on “Namrata Shrestha got sick during November Rain program”