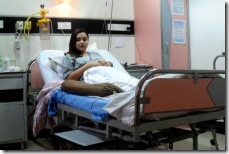 Nepali actress Sanchita Luitel was admitted to hospital for the operation of stone in her gall bladder. After the operation, the actress became very week and she was moved to Intensive Care Unit (ICU).

The operation to remove stone was conducted in the morning at 11 AM. After the operation, she was moved to ICU and kept there till 3 PM.

Sanchita was rushed to hospital when she had pain in her stomach on Tuesday. Doctor Rajendra Regmi had operated Sanchita to remove the stone.

Sanchita’s husband Nikhil Upreti hasn’t arrived from Mumbai. Nikhil has two family to look after and he had sacrificed his career in Nepali movie industry to marry Sanchita Luitel. But these days, Sanchita is living in her parents home tending two little kids. (photo credit filmykhabar)

We, at Nepaliactress.com, wish Sanchita a speedy recovery.

Correction – The stone was removed from gall bladder.