The fact about Nisha climbing as a guide was previously known and the proof is the following certificate issued by Ministry of Culture, Tourism & Civil Aviation. 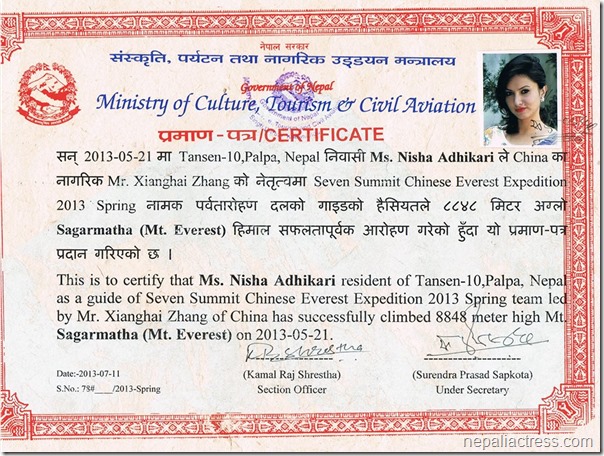 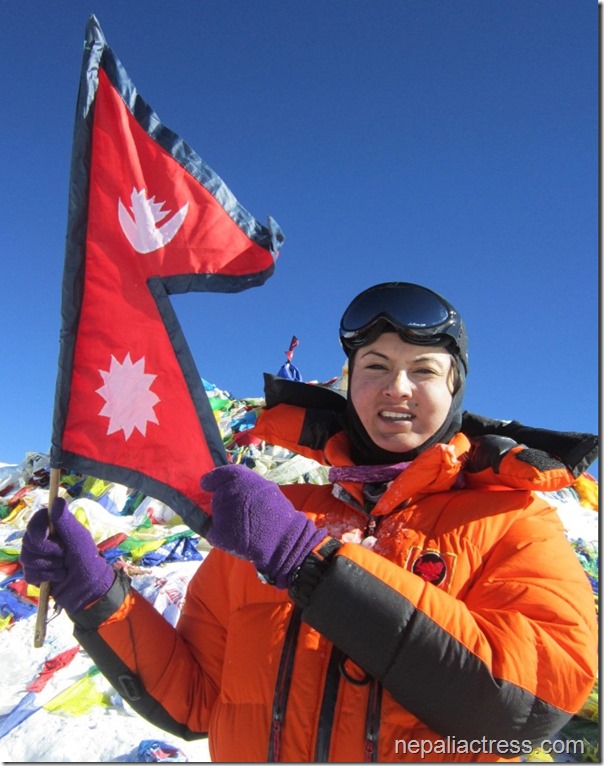 While sharing the certificate in a Facebook post, Nisha has written a long response to media reports and rumors about her Mt. Everest climbing.

This is for them who believed in me and for them who didn’t. Major Issues raised by the media: Few; daily newspapers(sadly), TV channels, online, and weekly magazines and papers alike, fm stations!

Issues raised: Nisha and Arjun didn’t pay royalty to the Government! Government will stop them, they got lost, their Sherpa died, they died, they don’t have the permit, they are there illegally…and so on…we by now know it all…some of the shameless features are still online…many of you only know the one-sided features. Arjun dai had to amputate 9 fingers and he didn’t deserve this controversy after all he is the first actor to reach the summit …I wonder how the few biased media would be kissing feet of a Bollywood actor if he came to summit Everest.

I have my own struggles and while the media was busy creating gossip and making up their own stories we were fighting for our lives. I have waited for this legal piece of paper to let Nepalese all around the world to know the disheartening reality of Nepalese youths who have chosen to stay back to do something for their country. Mt. Everest was a personal challenge. But now, I want you to know the details and while assumptions were made in the city. How we were preparing to face the Death zone. A documentary and a book will follow in 2014. As a tribute to all the Sherpas, my sponsors, every individual supporter, Seven Summit Treks and especially ARJUN KARKEE, the first actor ever from Nepal to reach the top of the world!

If you are a Nepali, you don’t need to pay a single penny to climb Mt. Everest. I didn’t go as a high altitude worker or as a porter and no Government official ever told me that my deeds were illegal and i can’t summit! I went as a guide because I am a trained guide from Nepal Mountaineering Association and, it requires more efficiency and skill to go as a guide than just a climber or a member of an expedition. It is irrelevant to the royalty.

There will be haters, doubters, people who will want to pull you down but in the end you have to believe in yourself and move on!!! . I would like to thank every one of you who believed in us and had faith.

One thought on “Actress Nisha Adhikari got the official certificate of her Mt. Everest climb”