This Valentine Day three new movies are releasing in theater. Actress Namrata Shrestha is featured as a blind girl in ‘Classic’ teamed up with Aryan Sigdel, actress Pooja Sharma is featured as a lover girl in ‘Prem Geet’ and actress Sushma Karki is featured in a simple girl’s role in ‘Chalechha Batas Sustari’.

Sushma is leaving her hot image behind in ‘Chalechha Batas Sustari’. Little glamor is expected from the blind girl’s role by Namrata Shrestha. That leaves Pooja Sharma the only actress featured in glamorous role in the movie. The movie also got a very good response in the premier show held on Wednesday. (watch the video report):

Actress Sushma Karki and hot image go hand-in-hand. She started as an item girl and a hot model who prefer bikini to any other dresses. Sushma and covering-up didn’t go together. But, when she realized that being a show-piece can’t take her far, she has decided to cover up and show her acting skills. That is what she told what she is doing in her upcoming movie ‘Chalechha Batas Sustari’. Watch the analysis in the following video:

Which actress will win the battle? What do you think? (Please comment.) 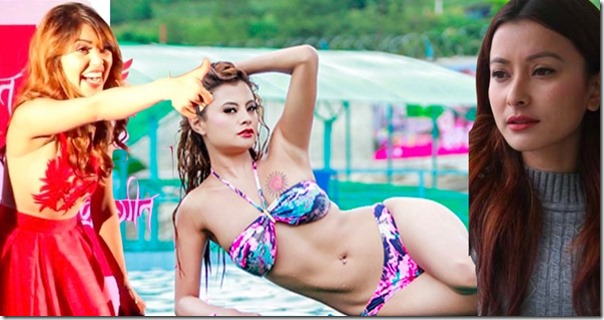