The first film of :

In that movie Namrata Shrestha was featured as a child artist who grows up to become actress Rupa Rana. These days, Rupa Rana has started working in character roles like the lead actor Saroj Khana. Rupa and Saroj are still the choice of preference for film makers in mom-dad roles. Deepa also works in character roles but, she is more into film direction than acting these days.

Sangini is a film about two little girls who are separated in their childhood. One lives in a village and another in a city. They fell in love with the same guy – Saroj Khanal.

I have no idea what Arpana Thapa is doing these days, actress Namrata is considered the top actress in the film industry. The talented of the two actresses in ‘Sangini’ Rupa Rana is happy in short character roles in movies these days. The less-talented one, Deepa Shree Niraula has become one of the most successful film directors in the industry.

Some credit Deepak Raj Giri for the success of Deepa Shree. But, one can’t be successful simply by other’s help. In movies, it depends more on the director on how an actor acts.

Right after the release of her second movie, a indecent video of Namrata was released online. In the private video she is seen with a musician. The incident was more damaging to Namrata than the guy. Namrata had to go into hiding for almost a year and after that she recovered and re-started acting in films. In addition to acting in movies, Namrata also runs a restaurant. The restaurant business is such an insurance for Namrata that she can afford to be choosy when she selects which movie to go for. 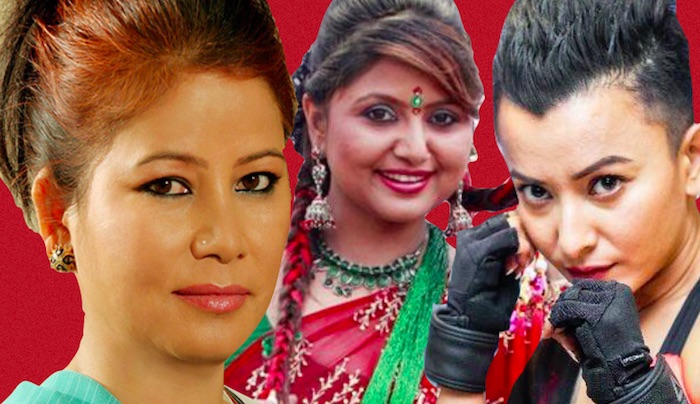