– ‘A Mero Hajur 2’ became a successful movie. Jharana is now one of the few successful female directors in the Nepali film industry.
– Jharana is planning to direct another movie (may be ‘A Mero Hajur 3’)
– She reportedly obtained a US Green Card (unconfirmed). Her daughter Suhana is studying in the USA and Jharana and Sunil Kumar Thapa have frequently visited the country in the last few months.

Actress Jharana Thapa is a well known actress in the Nepali movie industry. Before entering the film industry Jharana had married Sunil Kumar Thapa and started writing her name Jharana Thapa. But, originally Jharana is Bajracharya.

Jharana and Sunil Kumar have a daughter name Suhani Thapa, who has already grown up. 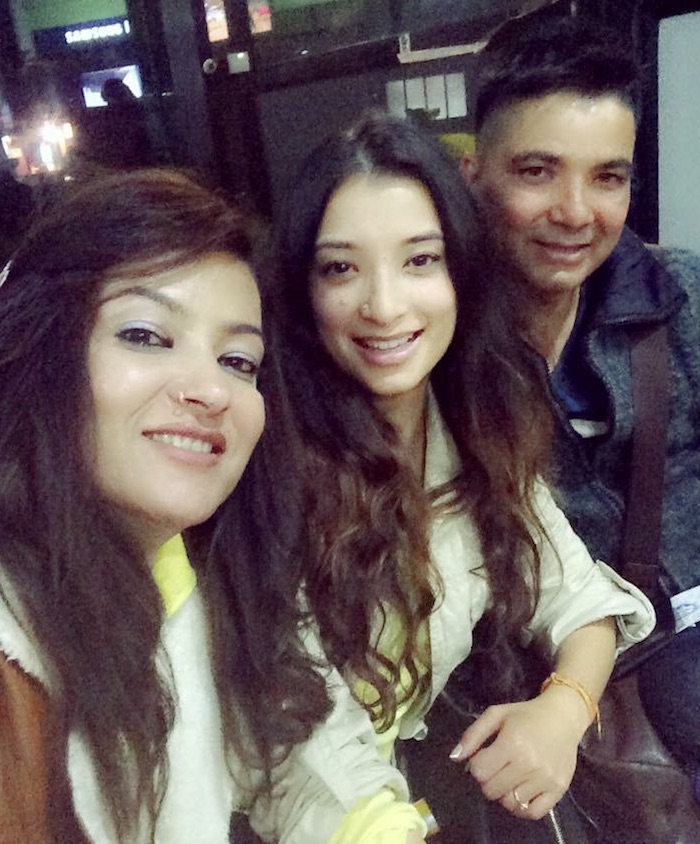 Jharana Thapa debuted as an actress in ‘Daijo’ at the age of 17. During her birthday in 2014, she told that she is planning to become a film director. The project however got delayed a while and she finally directed the movie in 2016. But, the movie is released (See update on top.).

In July 2015, Jharana and Sunil had celebrated 20 years of marriage.

Apart from being a top actress in the Nepali film industry, Jharana is also one of the top producers. After the success of ‘A Mero Hajur 2’, Jharana is now a successful director too. She had produced a number of movies in association with her husband, Sunil Kumar Thapa.

Sunil and Jharana started film production business with ‘Dharma Sankat’. After the success of the move other movies followed. The movies produced by Jharana are:

Actress Jharana Thapa is a religious actress. She worships gods everyday. She also consults astrologers before starting any new tasks. Every plans she made are usually according to the suggestion of astrologers. 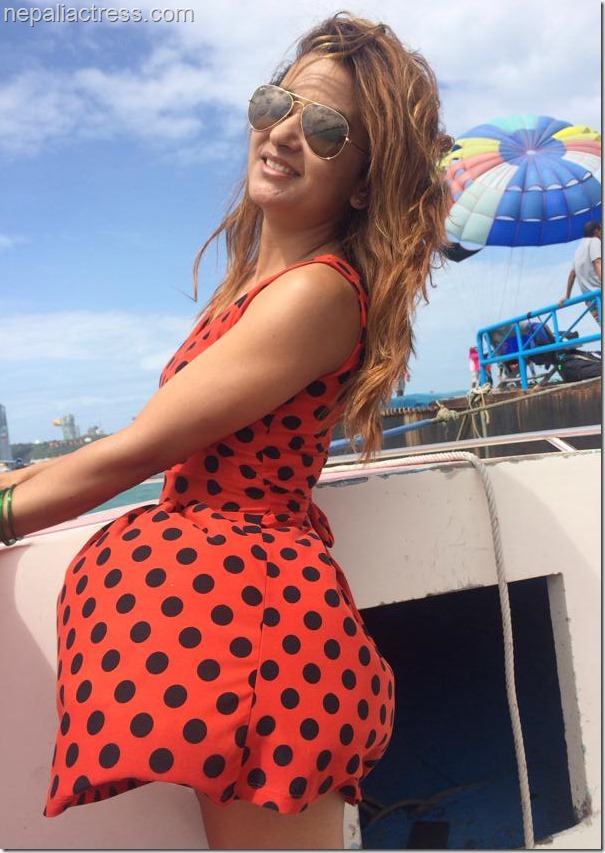 Jharana believes that being religious is to think positively of others, help those who need help and being positive. Although she is not fasting this Shrawan because of the death of her mother-in-law, usually she follow such tradition and she also fasts every full-moon day.

Although religious, Jharana isn’t superstitious. She doesn’t follow illogical beliefs like absurd belief that ‘cat brings bad luck if it crosses the road’.

About being happy, Jharana believes that positive thinking helps a person to be happy. She believes being positive is also the secret of her success. 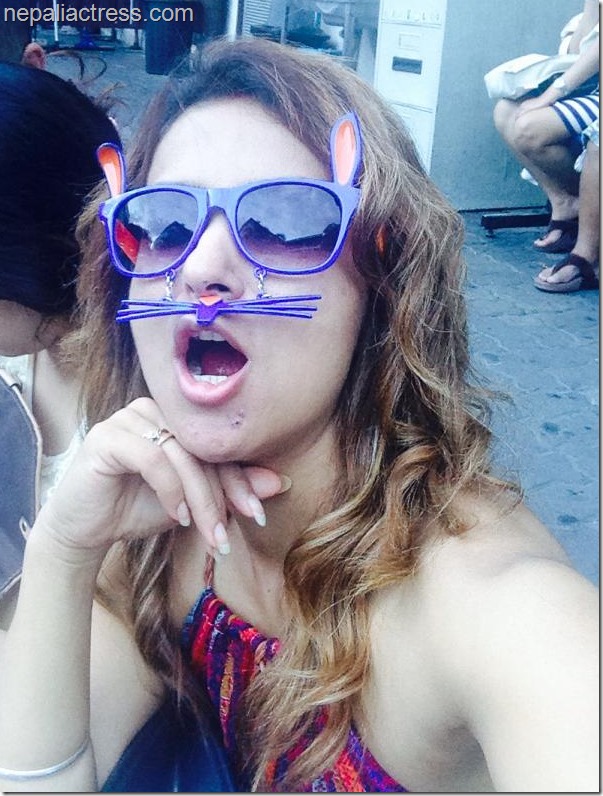 Actress Jharana Thapa is also a religious person who enjoys the celebration of Shrawan month. Jharana loves green bangles and mehandi worn in the month. Read Jharana’s take of the month in her own words: 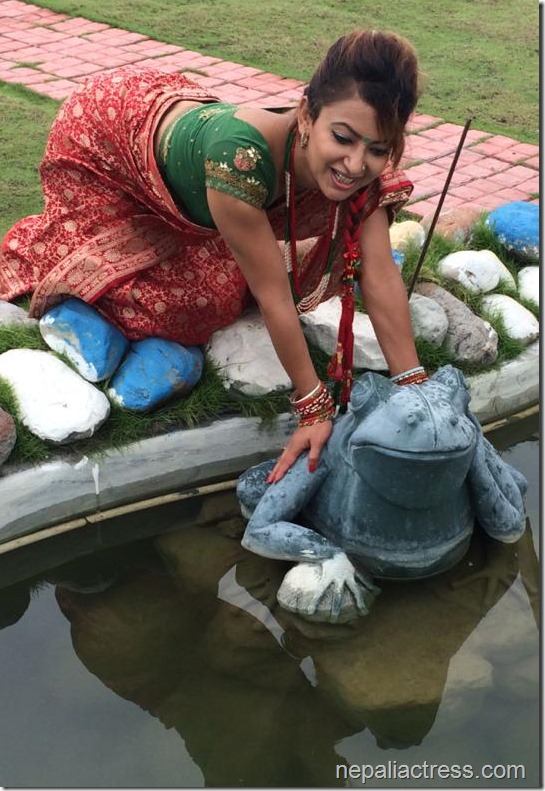 May be because I am a religious person, Shrawan months is special to me. In my childhood I had seen my mother and grandmother wearing green bangles, yello beads and red / green dresses and worshiping lord Shiva. I had been impressed and attracted to wearing such things. In this month one can usually find me wearing such dresses.

I can’t fast because of gastric problem but, I don’t eat non-vegetarian dishes throughout the month. I get happiness from small things so, wearing mehandi, green dress and yellow dresses are special for me.

I think, the new generation should also be motivated to follow the tradition. I am also focusing on it.

Nepali actress Jharana Thapa also celebrated Holi with friends in the film industry and family. Jharana was seen both in Karishma’s residence and Rekha’s place. 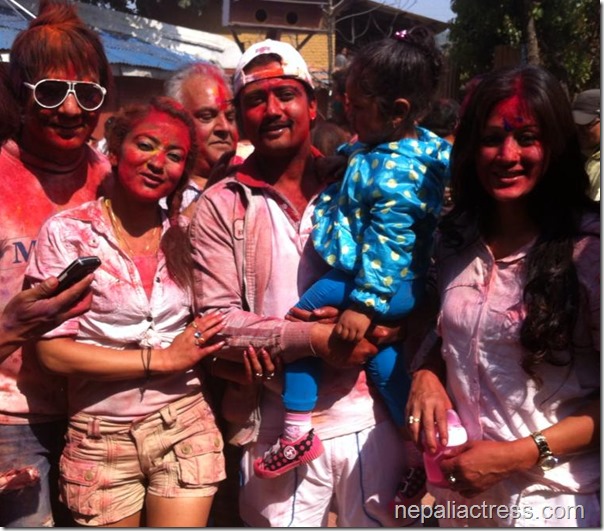 Jharana with Melina Manandhar and Mukesh Dhakal and their daughter in Karishma Manandhar‘s residence. 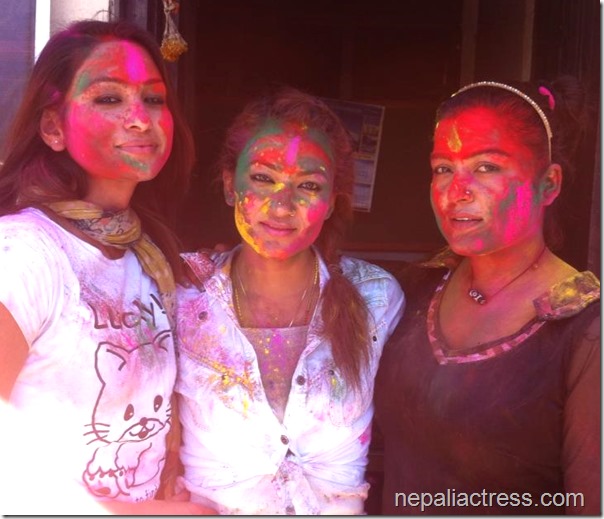 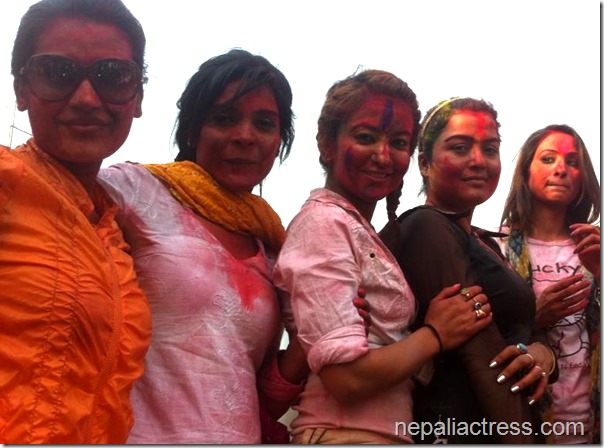 Jharana and other actresses with Rekha Thapa. 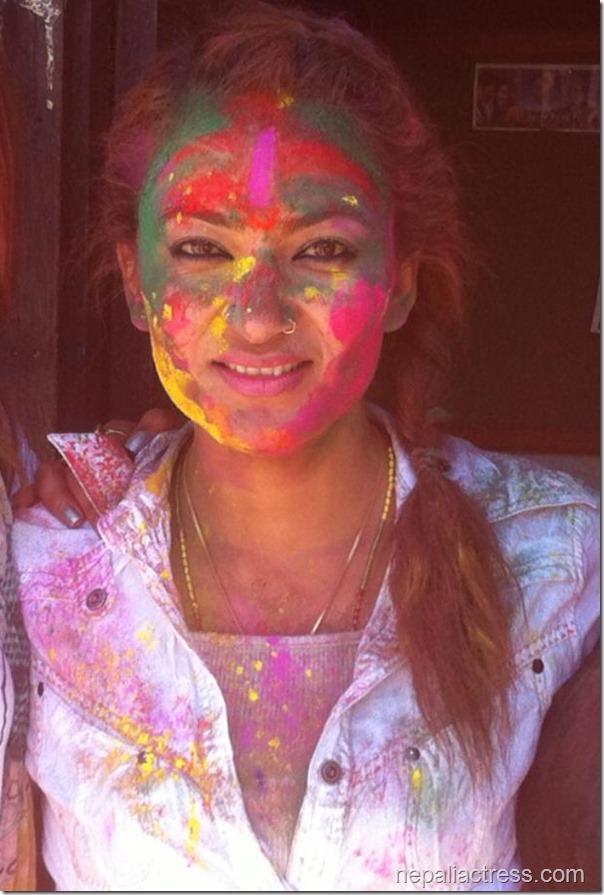 An online magazine, onlinkhabar, wrote about Nepali actress Jharana Thapa moving to a new house she bought last year at a cost of Rs. 20 million. The new house is located in Bhaisepati, east of Bhaktapur. 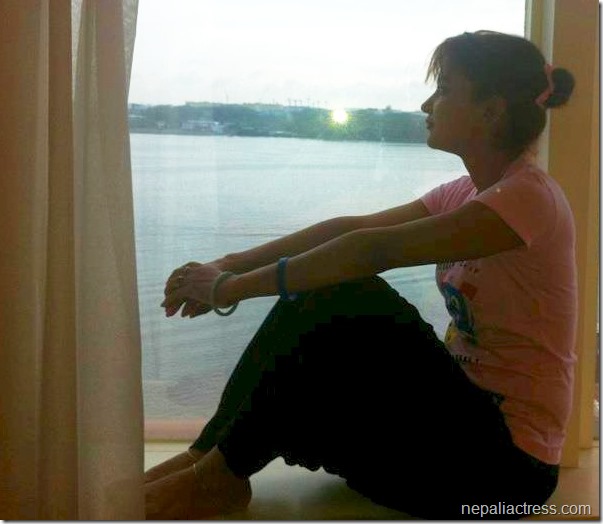 These days Jharana lives in a house in Baneshowr with her husband Sunil Kumar Thapa and a teenage daughter. She is going to rent the house after moving in the new house. The new house is a two and a half storied bungalow. 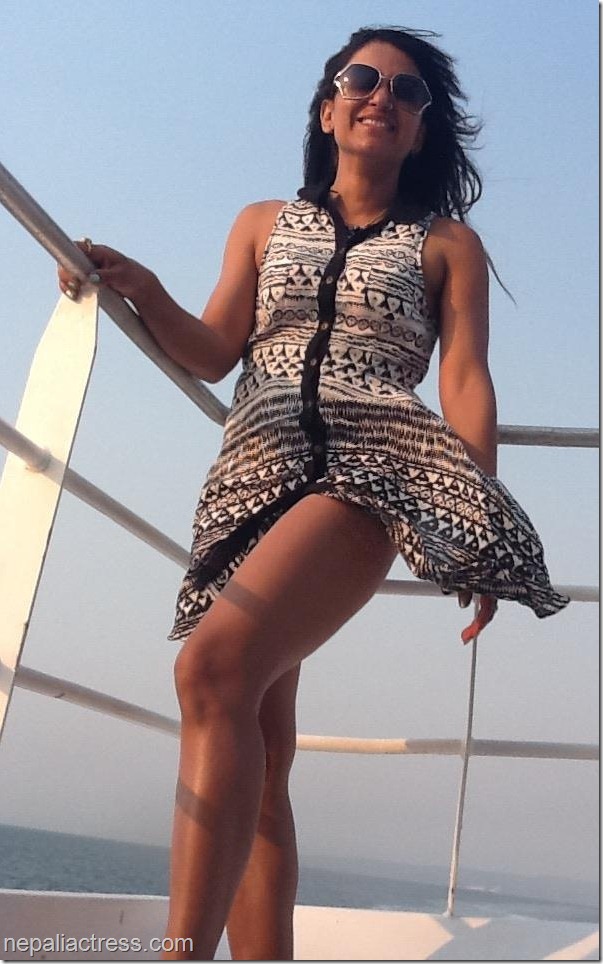 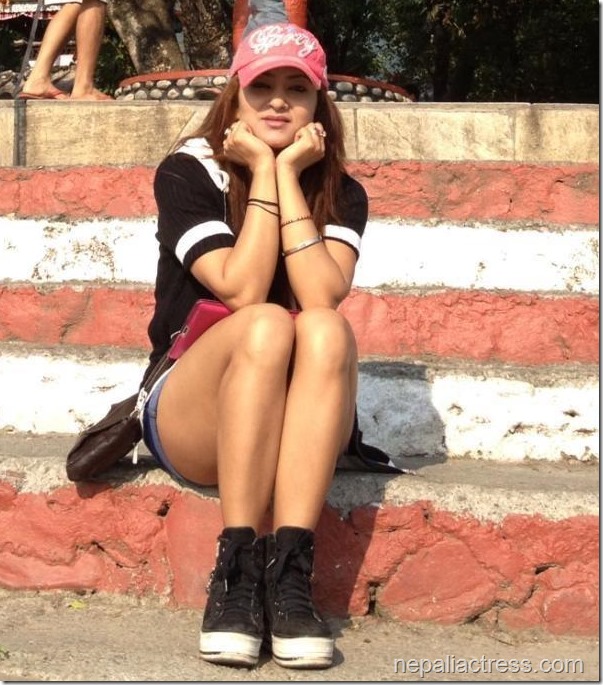 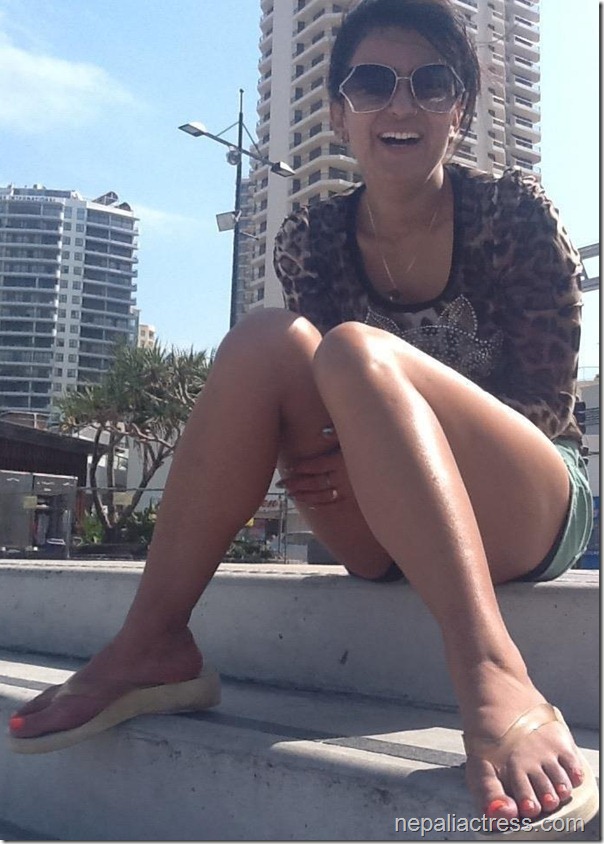