Hot actress Sushma Karki has found free time after the break up with her boyfriend, Naren. She was seen at the fundraising program organized by the National Music Artists organization for the support of the flood victims of Sunkoshi. 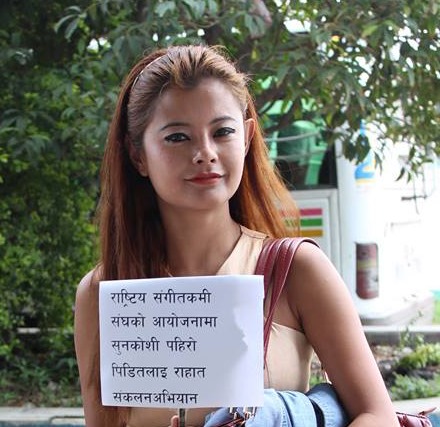 In the program organized on Satudray (August 9), she was carrying a pamphlet and was asking for the donation for the victims. With Sushma other artist like Resham Thapa, Birahi Karki, Prakash Katuwal.

The fund raising program collected Rs. 67,000 in cash and other things of approximate value of Rs. 200,000. The materials collected at the program will be transported to the affected area on the first week of Bhadra.

Breakup of Sushma has helped in the recovery of her career in entertainment industry. She had admitted that her acting career had been at the lowest point at the time of her break up (see video below).